She woke up to the startling alarm at 5:30 am, slid into her bathroom slippers and entered the bathroom to complete her morning chores. She then picked up the wailing baby, smiled sweetly at him, and receiving a reciprocated smile, placed him on the changing pad and changed his soiled diaper. Plugging him to her engorged breasts, she fed him milk to his heart content and put him back to sleep in his crib. Entering the kitchen, she prepared fresh and hot pancakes and tossed them onto her husband’s plate to appease his appetite. Donning her office suit, she lugged her handbag and the baby’s diaper bag, and carefully placed the baby in his car seat and drove him to his daycare.

END_OF_DOCUMENT_TOKEN_TO_BE_REPLACED

“I need to be in the water”. “If I want to swim, I need to be in the water”, I murmur as I stare at the overlooking trapezium-shaped pool spanning across my backyard. Finally, we are proud owners of the gorgeous property that housed the backyard pool. This stunning pool was one of the major deciding factors to invest in this property. Having closed the deal, we moved in during harsh winter, that was an inappropriate time to utilize the pool. We patiently waited until Spring for the temperature to warm up, so that we could start using the pool. Finally, it was Spring. The weather was gorgeous with the bright sun shining over horizon, crystal clear pool water, warm temperature, blooming flowers, chirping birds and green-hued flora. Everything was perfect – except my inability to swim.

END_OF_DOCUMENT_TOKEN_TO_BE_REPLACED

“I may have to start making my bed” thought Shrika as she picked up the messed cutlery from the table. A half emptied box of palak paneer lie on the table amidst a to-go box of fried rice,  samosas, alongside a spoon, plate, couple of napkins, and store bought bottled water. It was her first night at the dorm. She had never lived alone in her life. But, this time, it was a tough decision that she had made. Hailing from central southern part of USA, that was deprived of ivy league schools, she had opted MBA at Duke Fuqua, having aced her GMAT with a score of 750/800. Her analytical, math and verbal skills were excellent. She was an all rounder – good at academics, music, sports, debates, public speaking, philanthropy, and had won many laurels, that beautified the mantle over the fireplace of the den of her parents’ home. She was also an amicable person, loyal friend, loving child and an affectionate sister. Everybody loved her to the core. It was really disheartening for her to bid goodbye to her parents, sister, childhood friends, neighbors, classmates and her dog in home town. But, she had made her decision. She had to pursue her education, so she had to sacrifice everything that she loved and had to move to North Carolina to make her dream come true.

END_OF_DOCUMENT_TOKEN_TO_BE_REPLACED

Last weekend, we had the privilege of experiencing our first snowfall of 2016. Our entire place was enveloped in white sheet of 3-5 inches of snow. As I was experimenting with my Canon T4i, capturing some macro shots of frozen trees, branches, leaves, flowerbed, garden bench, in my side and front yards, suddenly I remembered that I had buried a time-capsule in my flower bed, few years ago. Currently being winter, there weren’t any plants flourishing, and it was the right opportunity to dig it up. With glove-clad hands, I pushed aside a huge heap of snow that camouflaged the flowerbed, exposing the visible layer of soil underneath. Then, I frantically began to separate the soil with my hands until I found what I was looking for. There it was! My sparkling iPhone 3GS, as new as ever. I grasped it with my soiled hands and turned it on. The battery was dead. I ran inside and fetched my iPhone charger and plugged it in, leaving it on the coffee table to charge completely.

After an hour, it was 99% charged. Suddenly, it started ringing. Curiously, I grabbed the phone and looked at the display screen. My eyes widened with bewilderment. It was a call from my FIL (Father in law) whom we lost in 2015. I was nervous to pick up the call. I pinched myself several times to confirm that it wasn’t a dream. Mustering courage, I picked up the call.

END_OF_DOCUMENT_TOKEN_TO_BE_REPLACED

He had created a tiny time of enchantment. Little Anna held her parents’ hands as she waited patiently in the long line at the gazebo.  It was a cold windy afternoon. The gazebo was packed with enthralled kids and their parents, everyone decked up in multiple layers of clothing including sweater and jackets to keep themselves warm in the biting cold and against gushy wind. Every kid excitedly waited to meet him, despite freezing cold. Everyone assumed that they have been good this year. A twenty foot tree stood in the garden beside the gazebo. It was beautifully decorated with plethora of ornaments of numerous colors. The excited shrills and hollers of kids filled the air. Infinite camera clicks rebounded the arena. Chatters, laughter and shrills filled the air. The line at the gazebo started becoming shorter.

A huge chair was placed at the center of the gazebo. It was neatly decorated. A well dressed man in red and white fur shirt and pants sat on it with poise. He had a long white beard and a thick mustache running over his upper lips. A red and white fur hat covered his head. It couldn’t protect his ears from cold. A thick black belt ran across his stomach. A sweet wide grin ran across his lips. He was patiently waiting for every kid to come up to him. His bag was loaded with variety of candies and candy canes. Whenever a kid from the line ran up to him, he smiled, picked up the kid and carefully made it sit on his lap. He softly whispered “Merry Christmas” into the kid’s ears and with a lovely smile asked “What’s on your wishlist “?. Every kid in front of little Anna excitedly squealed and ran to sit on his lap when it was their turn. They handed over their wishlists to him. He took every wishlist from every kid, opened it, read it, then, neatly folded and placed it into his red sack, that lay beside his right foot. Then, he carefully bent over, grabbing a piece of candy or candy cane from his goody bag and handed it over to every kid, whilst smiling and posing for their pictures that were being captured by their parents.

END_OF_DOCUMENT_TOKEN_TO_BE_REPLACED 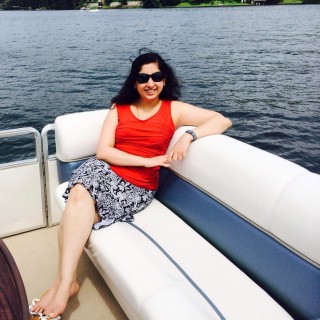